INVITED COMMENTARIES ON A GRAPH : Proportion of women smoking during pregnancy in European countries in 2010 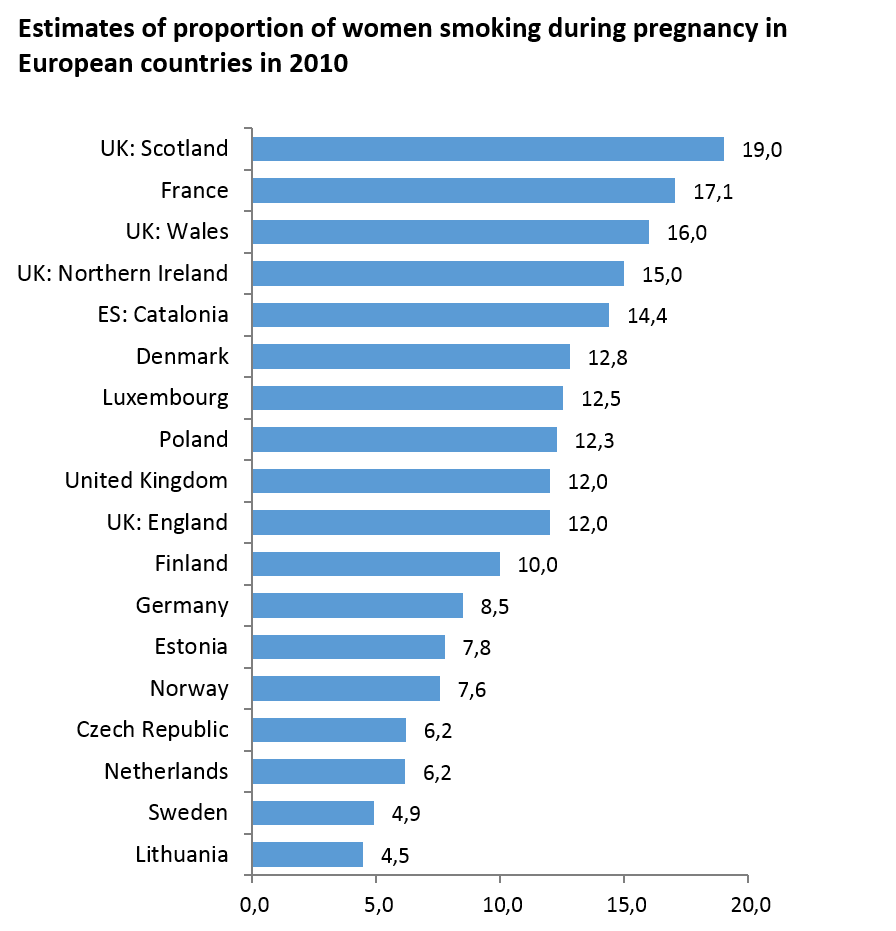 “The graph shows estimates of the proportion of women smoking during pregnancy in a range of European countries in 2010.  Scotland is top of the league: not a position we would wish to retain.

Other sources of information on maternal smoking that corroborate this figure are available.  Delivery records also contain information on the smoking status of women at their antenatal booking appointment (based on self report but accurate reporting is encouraged by routine use of carbon monoxide breath testing).  In 2009/10, 21% of women with smoking status recorded were current smokers.  Similarly, Health Visitors record the self reported smoking status of new mothers at their first postnatal visit (when the baby is 10-14 days old): in 2009/10, 19% of new mothers reported current smoking.  These figures show a high degree of consistency and further suggest that few women still smoking at antenatal booking manage to give up during or immediately after pregnancy, despite the widespread availability of stop smoking services.

The glimmer of good news is that smoking levels are falling in Scotland.  By 2014/15 the proportion of women reporting current smoking at antenatal booking had fallen from the 21% seen in 2009/10 to 18%.  This reflects trends seen in the wider population.  The Scottish Health Survey (SHeS) estimates that current smoking rates have fallen in the female adult (16-64 years) population from 34% in 1995 to 24% in 2015.  Even more encouragingly, the Scottish Schools Adolescent Lifestyle and Substance Use Survey (SALSUS) estimates that current regular (at least one cigarette per week) smoking among 15 year old girls has fallen from 29% in 1982 to 7% in 2015.  These encouraging trends reflect concerted policy efforts to tackle Scotland’s historically high smoking rates.  In 2006, Scotland was the first country within the United Kingdom to ban smoking in public places.  A comprehensive national tobacco control strategy was published in 2013.

There are therefore reasons to hope that Scotland’s position on future maternal smoking international comparison graphs may make more comfortable viewing.  There is one factor tempering that hope: the burgeoning use of e-cigarettes.  In 2015 the SHeS estimated that 7% of adult women used e-cigarettes, either alone or in conjunction with traditional cigarettes.  Even more worryingly, in 2015 SALSUS estimated that an astonishing 32% of 15 year olds had ever used e-cigarettes, and 3% were regular (at least once a week) users (with regular use generally confined to those also using traditional cigarettes).  It is currently unclear what these trends mean for the in utero exposure of future babies to nicotine and/or smoking.”

Smoking prevalence before pregnancy, that is among young women of childbearing age was 24.6% in 2010 according to data from the national study of women delivering which were used for the European Perinatal Health Report 2010. This proportion is average among other European countries. However, Poland's ranking may worsen in the future as according to the HBSC (Health Behavior in School-aged Children) studies report, there was an increasing trend of daily smoking prevalence among 15-years old girls between 2005 and 2006, 2009 and 2010, and 2013 and 20141. This may prognosticate an increase in smoking prevalence before pregnancy in the coming years if public health intervention is not undertaken.

Despite a potential increase in smoking rates before pregnancy, smoking levels during pregnancy seem to be rather stablein Poland. In my opinion, there is a widespread awareness of the negative consequences of smoking on the fetus in the country. This may encourage pregnant women to quit smoking in order to avoid social ostracism, and would explain a relatively high smoking cessation prevalence.

According to the randomized trial conducted in public maternity centres in Łódź in 2000-20012 , the proportion of quitters among pregnant smokers who underwent a standard intervention during pregnancy (leaflet) was 33.7%. This proportion among women who were randomized to the intervention group (four visits of the midwife at home) was 48.3% indicating that active counselling makes a difference.

Dr. Katarzyna Szamotulska, Head of the Department of Epidemiology and Biostatistics at the Institute of Mother and Child in Warsaw, and Euro-Peristat Scientific Committee member from Poland.