INVITED COMMENTARIES ON A GRAPH: Proportion of post-term births in European countries 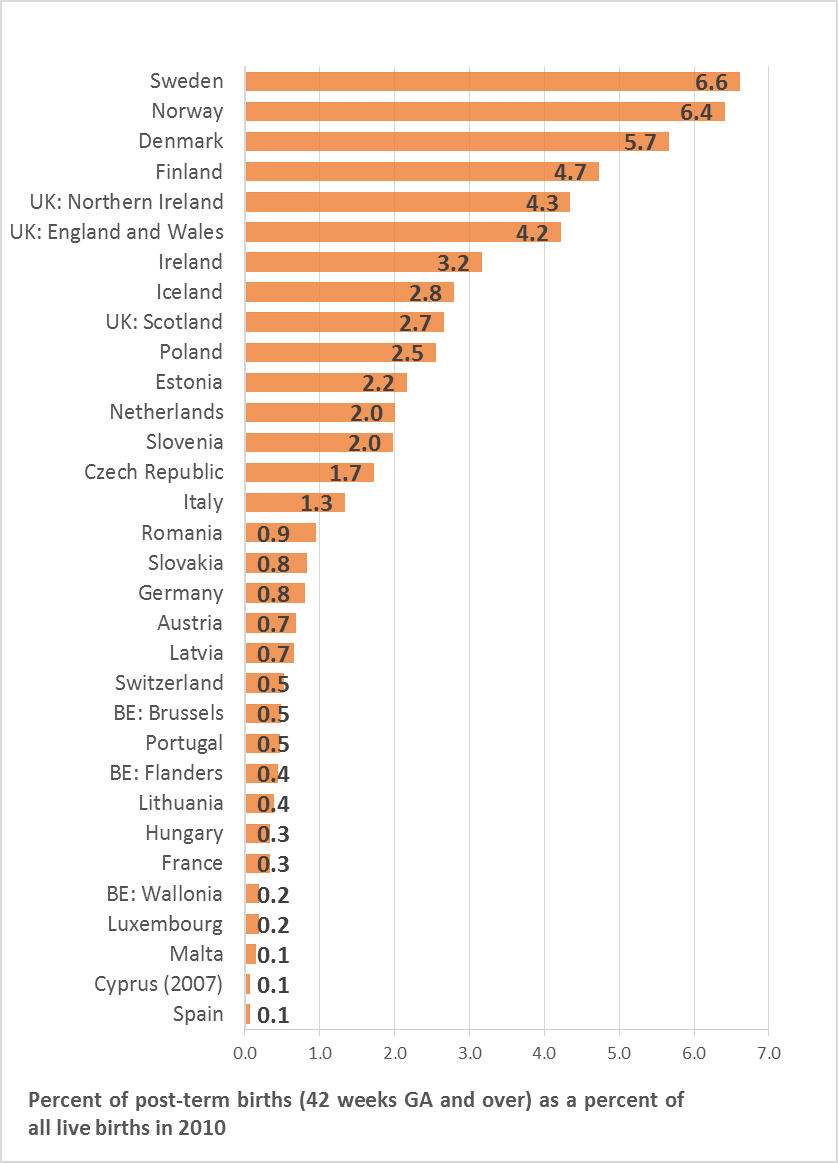 Data from the European Perinatal Health Report 2010. The Health and care of women and babies in Europe in 2010

A perspective from Sweden:

"The Swedish figures reflects the obstetric guidelines that are used in most Swedish counties: If no obstetric complications are present, no interventions are carried out until the pregnancies have reached 42 completed weeks. Recently, these guidelines have been questioned and they are under revision  in many counties. A national, randomized trial is soon to be commenced, which is scheduled to last two years [i]. Most counties are waiting for the results from this trial before they reconsider the current obstetric guidelines regarding prolonged pregnancies."

Dr. Karin Källen, Professor in the Department of Obstetrics and Gynaecology at Lund University, and Methodological Support Unit, National Board of Health and Welfare, Sweden

"Maybe we are trapped by the words. A “preterm” or “post-term” birth sounds less desirable and satisfactory than a term birth. As defined by ICD-9 and 10, a term birth is between 37+0 and 41+6, suggesting that, anything outside that range is abnormal[ii]. In addition, the Cochrane systematic review gives strong evidence: routine induction at 41 weeks reduces the incidence of stillbirth[iii].
Certainly, the PERISTAT data must reflect this, and countries with the highest prevalence of births at ≥42 weeks must have the highest rates of stillbirths?

Contrary to expectations, however, the four countries with the highest prevalence of births at ≥42 weeks are Nordic countries, and their stillbirth rates are among the lowest in Europe as are their rates of induction and caesarean section (CS). In the figure describing the proportion of post-term births, the Nordic countries are followed by UK and Ireland, who are not as successful as the Nordic countries for stillbirth and CS rates, but have results which are in line with the Western European average.

Once more, it is impossible from these observational data to do anything else than generate further questions.

Some questions are purely clinical:

Some other questions are conceptual, or quasi philosophical:

In summary, it would probably be unwise for countries who are routinely offering induction at 41 weeks to change their practice tomorrow. However, this is part of the more general discussion on when should interventions become routine, do babies and mothers benefit, and why do we want babies to be like calibrated apples."

Dr. Sophie Alexander is an obstetrician and professor in the Perinatal Epidemiology and Reproductive Health Unit at Université Libre de Bruxelles, and Euro-Peristat Scientific Committee member from Belgium