INVITED COMMENTARIES ON A GRAPH 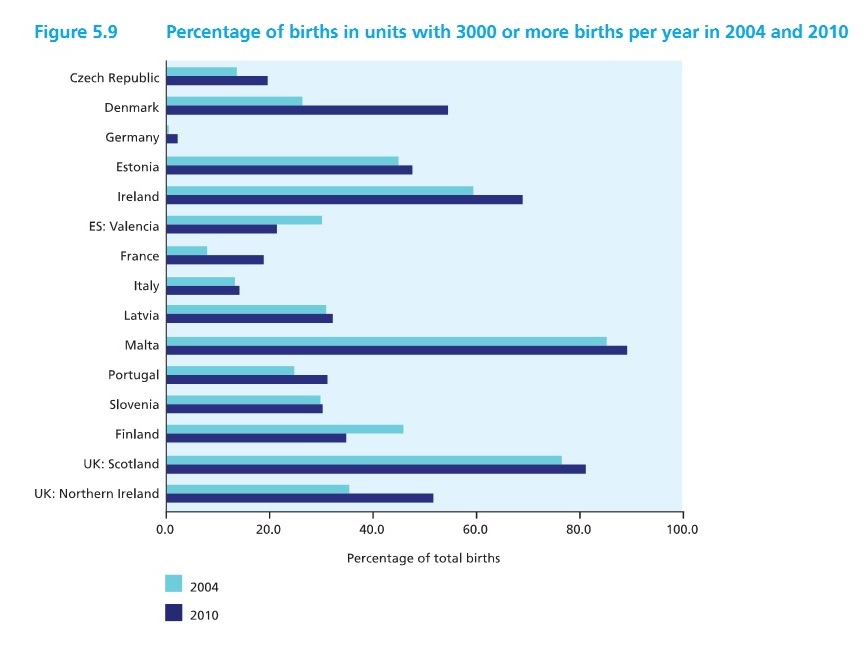 Graph from the European Perinatal Health Report 2010. The Health and care of women and babies in Europe in 2010,p.97

In Denmark, the hospitals are run by five regions. The regions and the Danish Society of Obstetrics and Gynecology have traditionally argued for centralization to ensure easy access to specialized care such as neonatal and pediatric services. The concentration of care in large units is a continuation of a development in the health care system that has been ongoing over the last 25 years. This development is also made possible by the fact that Denmark is a small country, which means that the distance to a birth unit is comparatively short, even after centralization.” - Dr. L Mortensen

"According to this graph, Germany is the country with the lowest number of large obstetrical departments (>3000 deliveries per year). ln Germany, pregnant women don’t prefer "Home delivery" but appreciate a "Home-like delivery" in a hospital located close to home. 98% of all live births took place in around 850 departments (2014); 2% were born out of hospital (1).

But though we hypothesize, that German results would be better for high-risk and low risk deliveries, if the centralization of obstetrical services were higher, in high-risk cases in perinatal centers with presence of obstetricians, midwives, neonatologists and anesthesiologists around the clock (7/24). Furthermore the high number of hospitals with an annual volume of less than 500 deliveries contributes to a number of perinatal deaths in low-risk cases. An evaluation based on the German perinatal survey found that mortality is increased three-fold in hospitals with low volume (2). This is speculated to be caused by a lack of readiness for unexpected obstetrical complications and due to inadequate staffing in these small units.

For the health of mothers and children in Germany, the political decision makers should move towards more centralized care for high-risk cases and closing down hospitals providing medically unsafe care for low risk mothers."- Pr. J. Dudenhausen, Pr. S. Schmidts

"The relative benefits and risks of birth in different settings have been widely debated in recent years but there is a consensus that, overall, larger size units might be better able to deal with any adverse outcome.

Even if there is a tendency in most European countries to concentrate births in larger size units, percent changes, with the exception of Denmark and Northern Ireland, are relatively small, and six years (2004-10) is a too short period of time to assess changes. However, this small change towards larger size birth units may have been induced by the ever growing medicalization of birth, by the alarming increase in litigation against obstetricians who act defensively referring women to larger hospitals for delivery and by the changes in the risk profile of women (greater number of older women delivering a first infant, increased rates of multiple births, increase in obesity, increase in the number of women with previous CS).

Looking at the graph it appears to me that there is a necessity of exploring ways on how to balance the need for safety with the preservation of primary level birth facilities linked to the communities.

Finally, the case of Valencia illustrates the difficulties of international comparisons. Most of the variables that may have influenced the shift towards having births in larger units also operate in Spain but the change between 2004-10 is just in the opposite direction from the rest of the European countries (with the exception of Finland). Administrative reasons are behind this discrepancy. In 2007, the Regional Government of Valencia reorganized the health sector and many births previously taking place in the consolidated largest units were derived to new tertiary hospitals which in 2010 still had a number of births below 3000."- Pr. F. Bolumar Montrull